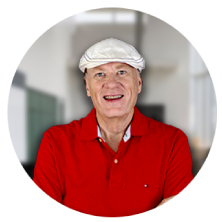 How a Little Short Guy, Terrified of Selling, Started a Business At Home From Scratch and Made $78 Million

-- Is a "lead generation system" worth $78 million?
-- The difference between "selling stuff" and a System for selling
-- What separated Walter from everyone else?
-- The 7 killer mistakes people make in creating marketing Systems
-- Why people don't value what they don't pay much for
-- How Walter generated leads at seminars
-- The vital necessity of steady lead flow
-- Do you know the marketing play you're running?
-- How long does it take to build a marketing funnel?

"So Marlon, how did you like the swimming pool?" he asked me.

"Walter, what swimming pool?" I whipped back.

He said, "You open the door in my bedroom and it
goes into a room with an Olympic-sized swimming
pool that belonged to FDR."

FDR stood for Franklin D. Roosevelt, the famed
President that got America out of the great
depression, according to many historians.

Anyway, I opened the little side door in Walter's
bedroom and sure enough. After you walked through
the spa room, there was another room with this
olympic-sized swimming pool in it. And you could
see the steps and the rail FDR used to lower
himself out of his wheelchair into the pool.

You know you're doing OK on money when you have an
ex-President's pool in your bedroom.

Walter had built a new house. So I was staying
in his bedroom in the old one. My purpose there
was to write sales letters for him.

Back in the day, I charged per page.

Copywriter's today would make fun of charging per page.

But they don't get it.

Back in the day, there were precious FEW copywriters.
You could charge however you wanted. My fees at the
time were in the top 5% or 10% of all copywriters.
Not that I had a LOT to compete with.

So here was this little short guy. Walter or "Itsy
Bitsy" as most people knew him who started out
as a failure in selling and ended up making $600
million via a few businesses he took public.

His FIRST successful business sold for $78 million,
even though the actual "earnings" of the business were
only a few million. He always told me he started it at
home from scratch. Of course, he quickly outgrew his home
and moved to offices and all that jazz.

Was it worth it to them? Sure was. They stood to
make many more millions from it on a yearly basis.

But all his success boiled down to one thing --
having a SYSTEM for selling stuff, whatever it was.

Notice I didn't just say "being a great sales person."

You don't build billion dollar businesses by selling
everything yourself. You create a SYSTEM for selling
that's a whole process.

Once you get that System down pat, you can bring in
sales people on salary or commission (or both) to
do the selling for you.

Lead generation on a consistent basis separated Walter
from everyone else. He created Systems that generated
tons of leads. All sales people want qualified, warm
leads more than anything else.

If you have warm, qualified leads (interested people)
then the sales people will come.

One time Walter and I took a walk outside his ranch
home up the somewhat steep hill there. I fired question
after question about his lead generation System.

I could write a book or two on what I learned from
Walter.

But the main thing is that a sales machine does NOT
run without a steady flow of leads.

Here are a few common mistakes people make in putting
together their lead generation System:

1. Failing to identify the hot buttons of the target
audience.

You can't get people into your marketing funnel unless
and until you know what turns them on. Walter knew
the hot buttons of his audience inside and out. This
is step one.

Just as an example, when Walter spoke at conventions
for dentists, he offered a freebie report on a super
hot topic if they'd just give him their business card.
Almost everyone did because he KNEW their hot buttons.

2. Failing to know in advance the OUTCOME you want
when someone enters your marketing funnel.

Walter had a clearly defined path his prospects would
go through.

Where are they going? What actions are they going to
take? How are you going to get them to buy progressively
larger amounts over and over?

3. Trying once or twice to get people into your marketing
funnel and then giving up.

Success results from testing and tracking a variety of
possibilities over and over. Walter used inbound sales
people for this. But in other businesses, he used outside
commission sales people.

4. Not knowing in advance the "marketing play" you're
running.

Are you targeting people who are underserved? Overserved?
Non consumers? Are you playing offense? Flanking moves?
Guerrilla tactics?

5. Using feast or famine lead generation techniques
that leave you high and dry after "the big event" is over.

One thing Walter did in his seminar business for dentists
was tons of public speaking. This crude lead generation
method takes a lot of work but he did it all the time
because he knew how critical a constant flow of leads was
to that particular business.

6. Failing to split test many variations of your name
capture "squeeze" page until you get 50% or more to join
your list on a consistent, routine basis.

7. Failing to have a pre-planned, tested follow up
sequence in place.

Now, that may sound like a daunting task. But a friend of
mine just totally rebuilt his marketing funnel since January
of this year. He anticipates doing $70,000 this month, all
from consistent, steady lead generation, without product
launch mania.

He anticipates being able to ramp up his funnel to $100,000
a month within 6 months. And this guy has been involved
in Internet marketing for only 2 years, more or less.

Focus on lead generation, Systems and the marketing process.

Who do you want to target?

Why do you want to target them?

Do they have money to buy?

What will you offer them as a freebie to GET them into your
marketing funnel?

What marketing sequence will you follow up with to get them
to buy?

What are YOU focusing on?

Have you been focusing on finding places your target audience
hangs? Creating offers that get them on your list? And then
a sales process or sequence that gets them to buy progressively
larger dollar amounts from you?

I can tell you from a great deal of personal experience that
people will benefit VERY LITTLE from things they pay little
for. Psychologically, they don't value or respect the information.

If you don't value what you sell, how is anyone else going to value
it? I'm NOT saying charge for shoddy products. It's a given that
you sell quality products and services.

But don't be shy about charging for what you sell. Of course, you
have to learn the marketing SKILLS that allow you to GET PAID for
the great value you offer.

One of my friends used to sell a seminar. He had to raise the
price to $5,000 before he could actually get people to DO what they
learned. Any price less than that and they didn't value the info
enough to actually do it. They just viewed it as something
interesting to think about.

Again, people don't respect and value what they don't pay for. Mark
it down. Repeat it as your mantra. You know that whole thing about
"move the free line?" Yeah, it's true -- on your initial marketing
funnel. You gotta do whatever it takes to get people INTO your
funnel.

Once they're there? Charge 'em. Seriously. If you don't "get
that" then you really don't understand how the human brain works and
you've got a lot of learning about marketing, psychology and the
human brain to do. Now, if you don't care what people do, or if you
don't care if they benefit, then yeah, sell your stuff for a song
and a dance and be done with it. You won't help that many people
but you'll get lots of compliments on how cheap you are.

So what secret did Walter have others didn't?

His Systems generated thousands and thousands of leads from hot,
interested prospective buyers (what we in the biz call "prospects).

2. He charged a fair but substantial price for what he sold.

There's a saying that the trick to having money is to get people
to buy from you, or something like that.

I think it was Zig Ziglar who said poor sales people have skinny kids.

3. Walter had a passion for learning

There's this odd balance between buying information and doing.

If all you do is buy, buy, buy and you never DO, then you're on
the wrong path.

At the same time, you'll find out that Charlie T. Jones spoke
the truth when he said, "Leaders are readers."

You gotta balance learning and doing. You need BOTH wheels on
your marketing machine.

1. Find out who you want to target with your offer.

2. Make an enticing offer to get people into your marketing funnel.

3. Create a lead generation machine to send lots of people into
that marketing funnel.

4. Assemble your follow up system to get people to buy from you.

5. Charge for the value you create. Don't undersell yourself.

6. Split test the living daylights out of your lead capture page!

PS #1 -- Would you like to have a side hustle or full-time marketing business?  Or get more sales for the one you have?
Check out the Inner Circle here.